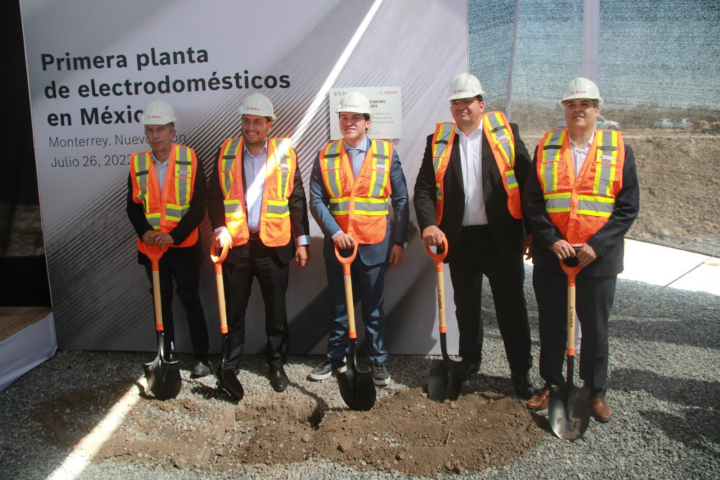 Bosch, one of the world’s leading engineering and technology companies, held today a groundbreaking ceremony for its new facility in Monterrey, Mexico, which will start operations in 2024 at Interpuerto Industrial Park. The German multinational will invest 254 million USD and create more than 1,500 jobs to produce up to 500,000 refrigerators per year.

On its announcement back in March, Carla Kriwet, CEO of BSH, said that “The refrigeration appliances to be produced at the new facility are specifically tailored to the large storage capacity needs of consumers in the North American market”.

“(The facility) will be an important pillar of the company’s growth strategy in the Americas and our worldwide production network,” Kriwet said.

René Schlegel, President of Bosch Mexico, pointed out that “Mexico has a very good infrastructure, a well-developed supplier network and a skilled and specialized workforce, which makes it an excellent location for BSH production.”

The new facility in Mexico, he noted, will meet high standards of sustainability and efficiency, not only in terms of construction and the materials it will use but also in factory operations.

This project reinforces Monterrey’s position as an international hub for home appliances manufacturing and reaffirms its place as Mexico’s top producer in this industry, representing 21% of the national total production.

Mexico is Germany’s largest trade partner in Latin America, while Germany is Mexico’s largest trading partner in the European Union. In 2021, bilateral trade amounted to just over 20 billion euros. Since 1999 Mexico has attracted a total of $28.5 billion USD of German foreign direct investment.

In 2021, Nuevo Leon registered the highest German FDI figure in history with more than $199.2 million USD, representing 12.1% of the national total German FDI in 2021. Currently, there are 92 German companies operating successfully in the State, among them Siemens, Daimler, Trumpf, Kern Liebers, Osram, Güntner, Liebherr, Continental, and Mekra Lang.