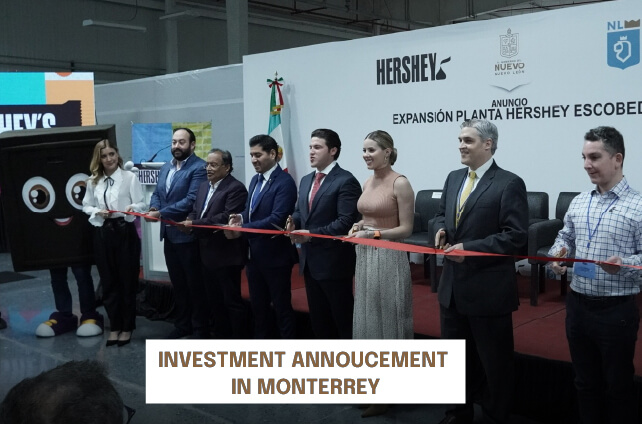 The great American chocolate bar is being produced right here in Monterrey.

The American multinational, one of the largest chocolate manufacturers in the world, The Hershey Company just announced its most recent expansion for its operations in Monterrey, Nuevo Leon, Mexico.

The event was led by executives from The Hershey Company as well as state government officials such as Samuel García, Governor of Nuevo Leon, and Iván Rivas Rodríguez, Minister of Economy of Nuevo Leon.

The Hershey Company will invest $90 million USD to expand its facility in Monterrey, the 3rd largest in the world. They will increase their operations by 25%, reaching  3,000 employees, and a production capacity of 115,000 tons of chocolates like Reese’s, Kisses, York, and Hershey Bars.

Martín Venegas Gómez, Director of Manufacturing at Hershey’s, mentioned that they remain committed to economic development and environmental protection in Nuevo Leon.

“We will continue working to be a benchmark company in economic, social, and environmental matters. We are aware of the role we play with our people, with our community, with our customers, and with the planet”.

The Secretary of Economy, Iván Rivas, mentioned that international companies doing business in Nuevo Leon keep growing in the state because they find all the conditions they need in order to be successful, like the right human capital, infrastructure, and proactive business environment.

“Hershey’s is an example that large companies can expand and increase their production in Nuevo Leon, thanks to the skilled human capital, infrastructure, and optimal conditions provided by the state,” said the state official.

US companies such as Amazon, Mattel, and Stanley Black & Decker keep trusting Monterrey as the best place to invest in Mexico. Monterrey had a record-breaking year in the attraction of Foreign Direct Investment from the United States with $3 billion US Dollars in 2021, an all-time high.