A business mission to Germany organized by the Ministry of Economy of Nuevo Leon and Invest Monterrey wrapped up a successful week full of meetings with the aim of promoting the state as one of the most attractive destinations for investing in North America. 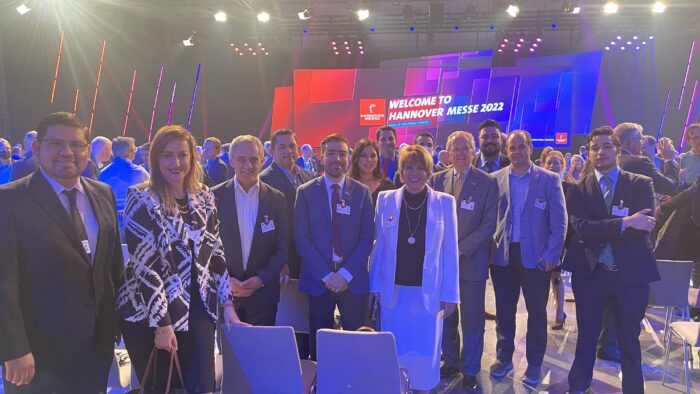 The delegation from Nuevo Leon participated in the world’s leading trade show for industrial technology: Hannover Messe 2022. After two years impacted by the pandemic, the event attracted more than 75,000 visitors and 2,500 exhibitors to discuss the latest trends in industrial technology like Industry 4.0, Hydrogen, Artificial Intelligence, E-Mobility, Machine Learning, and Robotics.

Dozens of business meetings were held with transnational companies, chambers of commerce, educational institutions, public sector representatives, and international organizations. The delegation from Nuevo Leon also teamed up in Hannover Messe with counterparts from Jalisco, Aguascalientes, Querétaro, and Puebla in promoting Mexico as an attractive investment destination. 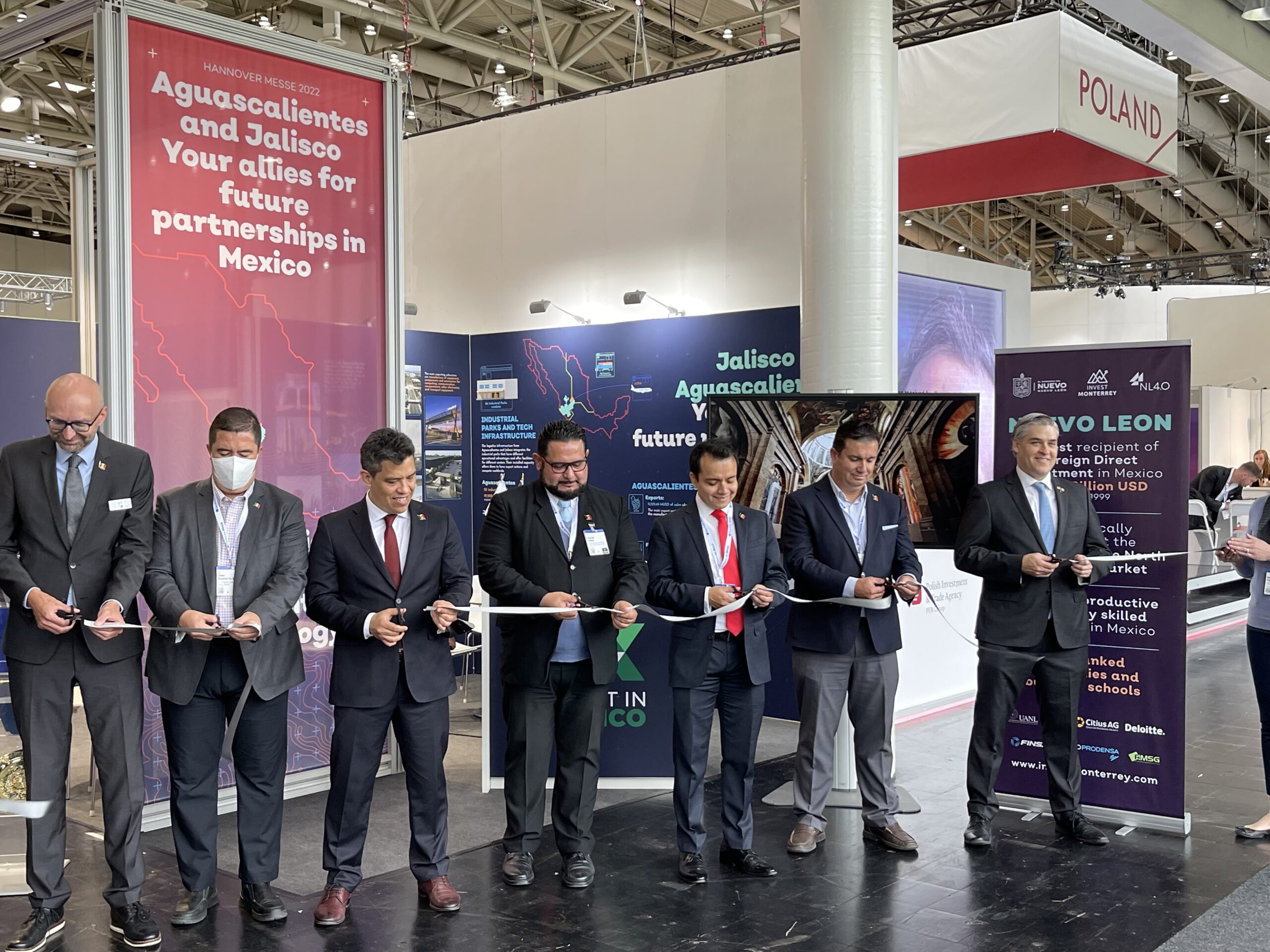 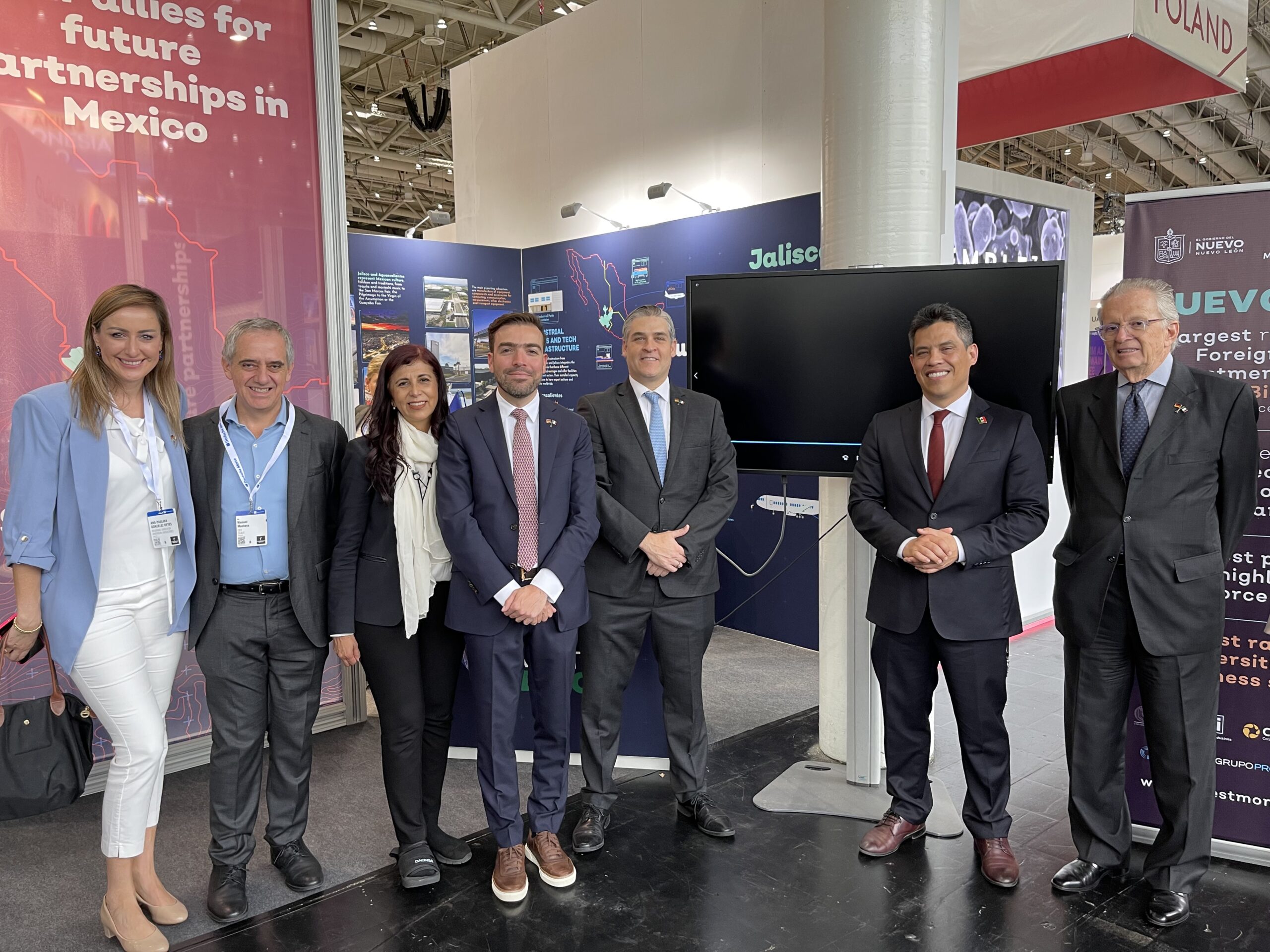 At Hannover Messe 2022, Alejandro Preinfalk, CEO of Siemens Mexico, announced a $35 million USD investment to expand the company’s operations in Monterrey. The ‘Mitras Project’ will create 450 new jobs in Siemens’ largest facility in Mexico. Siemens is the largest industrial manufacturing company in Europe, with an annual revenue of more than 90 billion USD and 300,000 employees around the world. 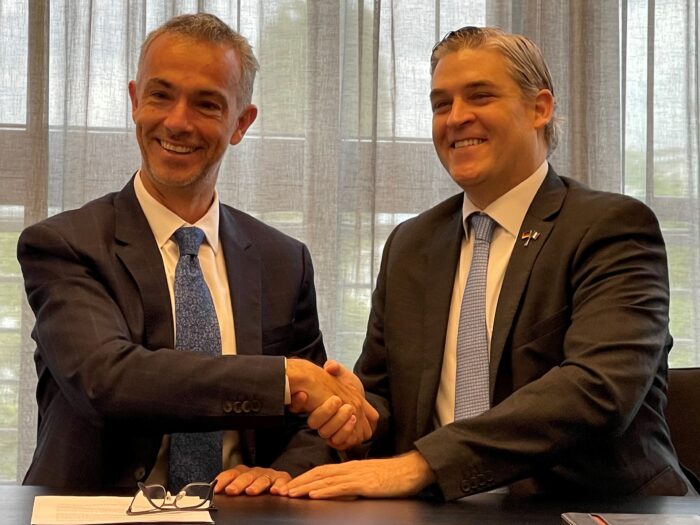 As part of the activities in Hannover, the Secretary of Economy, Ivan Rivas, had the opportunity of highlighting Nuevo Leon’s competitive advantages for doing business at the Global Investment Convention, organized by Crescendo Worldwide, alongside representatives from investment promotion agencies from Portugal and India. 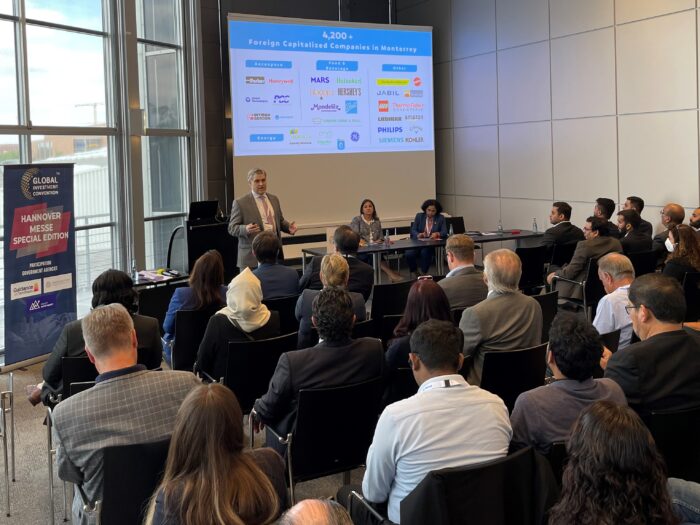 After Hannover, the delegation traveled to south Germany, to the State of Baden-Württemberg, one of the most powerful economies in Europe (GDP: 570 billion USD), home to big companies like Daimler, Bosch, and Porsche, and the one with the most ‘hidden champions’ in the world.

‘Hidden Champion’, is a term used in Germany to describe medium-sized companies (with a revenue below 5 billion USD), mostly family-owned, that are highly specialized world-market leaders with a low level of public awareness. According to Professor Hermann Simon, there are 1,300 ‘hidden champions’ in Germany, which is almost half of the 2,700 that exist worldwide. The state of Baden-Württemberg has around 400 ‘hidden champions’.

Alongside the Ministry of Economy of the State of Nuevo Leon, the Mexican Embassy to Germany, and Deloitte, Invest Monterrey organized a business seminar in Stuttgart, the capital of the State of Baden-Württemberg, to promote Monterrey I Nuevo Leon as a top investment destination among German companies interested in expanding operations to North America. 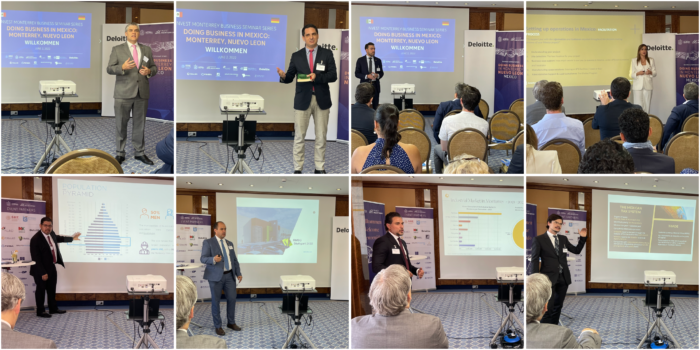 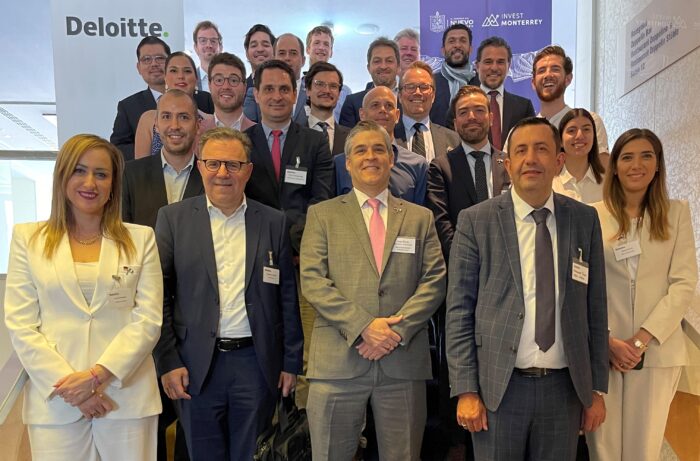 The companies who attended the seminar were able to hear information from experts in fields like real estate, taxes, and labor, by Invest Monterrey’s partners Citius AG, RMSG, Deloitte, American Industries, Prodensa, Zeitgeist, and TMH.

The delegation also visited companies directly in their headquarters all around Baden-Württemberg:

Kern Liebers, global technology leader in the production of high-precision metal parts, announced an investment to expand its current operations in Monterrey. With this project, the company will be reaching a total of more than $7 million USD in investments since they arrived in Monterrey and 450 jobs. Kern Liebers is considered a ‘hidden champion’. 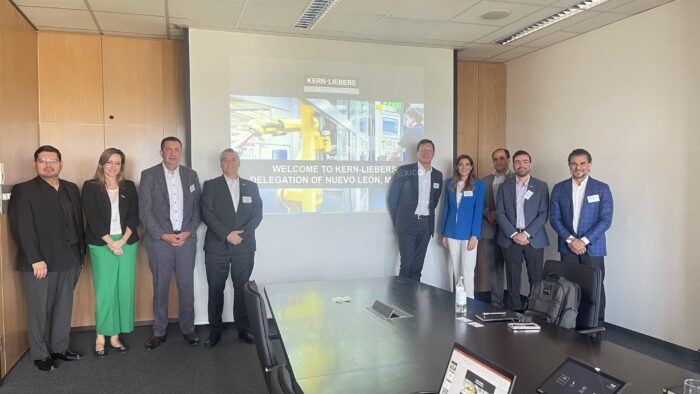 Trumpf, a ‘hidden champion’, global leader in the production of machine tools and laser technology, shares with the delegation the latest technology and their growth plans. The company has a 90-employee operation in Monterrey, where they produce components for high-tech industrial machines. 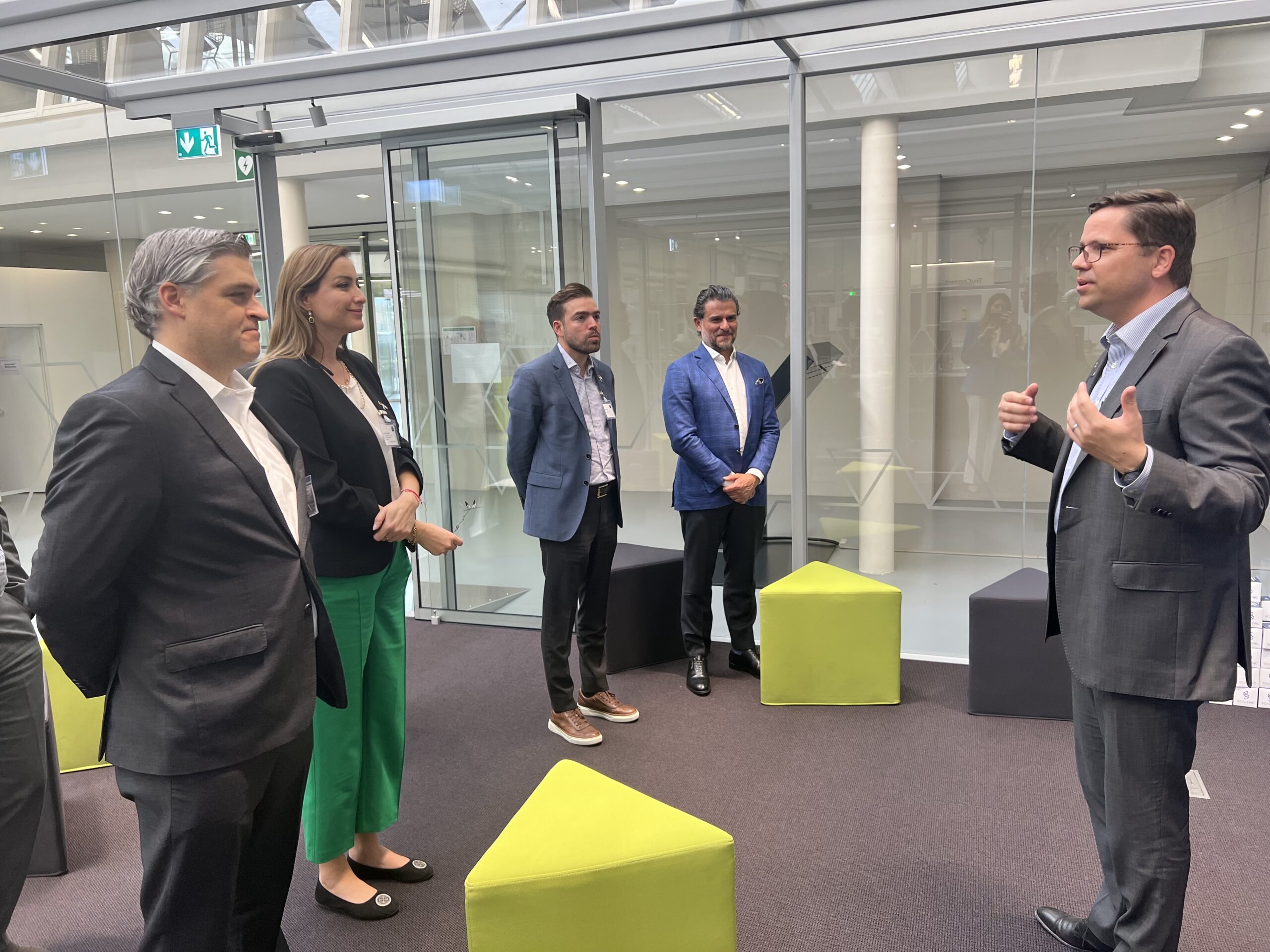 Daimler Trucks is one of the world’s largest commercial vehicle manufacturers, with a revenue of more than 40 billion USD, more than 100,000 employees, and over 40 production sites around the globe, one of them in Monterrey, where they have 800 people and 600 local suppliers. The company shared with the delegation an insight of their future plans for their operation in Monterrey, which will be focused on electrification. 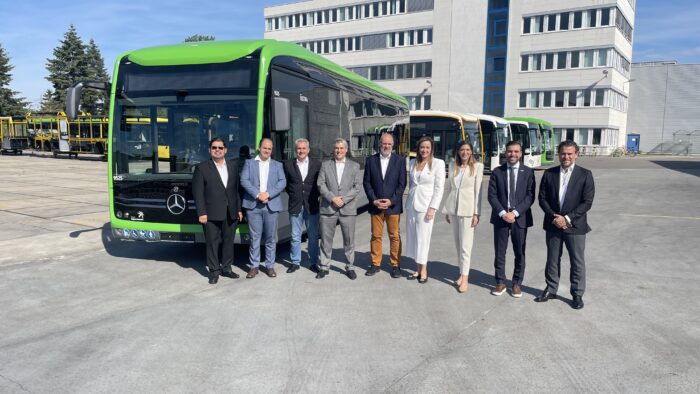 Bosch is one of the largest companies in the world with a revenue of more than 80 billion USD and 400,000 employees worldwide. Through its consumer goods subsidiary, B/S/H, the company recently announced a 260 million USD investment in a carbon-free facility in Monterrey that will create 1,500 new jobs, located inside Interpuerto Industrial Park. The company’s executives shared with the delegation insights of their future facility in Monterrey, where in a first phase they will be producing high-end refrigerators for the North American Market.

Mexico is Germany’s largest trade partner in Latin America, while Germany is Mexico’s largest trading partner in the European Union. In 2021, bilateral trade amounted to just over 20 billion euros. Since 1999 Mexico has attracted a total of $28.5 billion USD of German foreign direct investment.

In Nuevo Leon, 92 German companies operate successfully, among them Siemens, Daimler, Trumpf, Kern Liebers, Osram, Güntner, Liebherr, Continental, and Mekra Lang. This year ZF, one of the leading companies in the production of high-tech components for electric and autonomous vehicles inaugurated the first phase of a business campus that will include an R&D Center, a Production Facility, and a Shared Services Center.